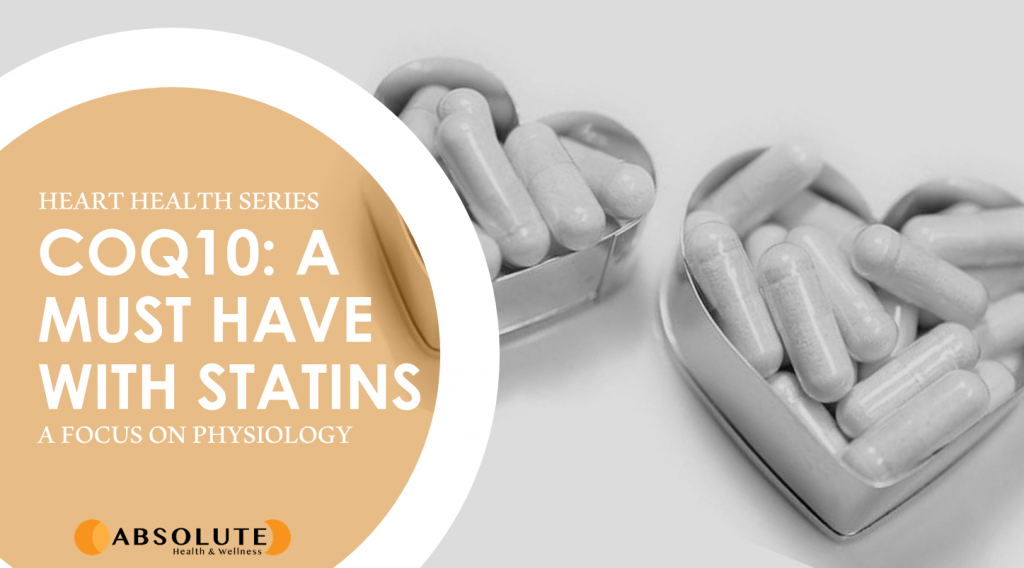 Statins are one of the most commonly prescribed drugs in North America. There is controversy about their efficacy and safety - but one thing is for sure:  CoQ10 must be considered as an adjunct treatment. To learn about CoQ10's use in general, click here. To learn how to pick CoQ10 supplements, click here.

A little Background on CoQ10

Discovery: CoQ10 (or Coenzyme Q10) was discovered in 1957. It wasn't until 1978, that Peter Mitchell, PhD determined CoQ10 created energy at a cellular level. This was enough to win Mitchell a Nobel Prize in chemistry - proving how important this molecule is [1]. It is a lipid (fat) soluble molecule, and turns out it's found in the highest concentrations in metabolically active tissue (muscle of the heart, skeletal muscle, brain) [1].

CoQ10 in our Bodies

CoQ10 makes it into our bodies in one of three ways:

Clinically, statins are prescribed by doctors to lower cholesterol.

Figure 1: The biochemical processes that make cholesterol and CoQ10 in the liver. As you can see, a Statin drug blocks both from being made.

Figure 1 (right) depicts the pathway by which statins work in the liver. HMG-CoA would ordinarily turn into mevalonic acid via an enzyme HMG-CoA reductase. Statins (also referred to as HMG-CoA reductase inhibitors) block this process from happening; this is depicted by the red X in the diagram. Downstream, you can see cholesterol and CoQ10 would have been made through that process. So although statins may be effective in reducing cholesterol, they also reduce CoQ10.

There are numerous studies and world renown cardiologists acknowledging statins are proven to deplete CoQ10 [1] [3]. Not only is it known that statins deplete CoQ10, there is evidence there are detrimental consequences from having too little CoQ10. The drug-induced depletion is dose related and more notable in those with pre-existing deficiency such as the elderly and those previously suffering from heart failure [3]. The specific effects of statin-depleted CoQ10 are identified later.

Dr. Peter Langsjoen, MD is a Texas cardiologist who has published several research papers and case reports on the effects of statins and the importance of CoQ10 supplementation. In 1990, he presented a special report to the National Academy of Science, describing the profound effect CoQ10 supplementation has on statin users. In the report - he describes several cases where patients suffered from progressive cardiac degeneration but saw marked improvement after oral administration of CoQ10 [4]. The full report can be found here.

Why you should supplement with CoQ10 if you're on a Statin

Supplementing with CoQ10 has no ill effects on the cholesterol lowering or anti-inflammatory effects of statins [3]. Most importantly, CoQ10 is very important to cellular health.Remember, its known statins block CoQ10 production. CoQ10 plays a vital role in our heart and muscle cells, and a statin-induced coQ10 deficiency can cause a myriad of issues, as I will discuss now.

Remember the first of the three main roles of CoQ10: Mitochondrial energy production. To recap, ATP is the energy currency of our body. Every process that requires 'energy' uses ATP. The mitochondria are referred to as the powerhouses of the cell. It's a tiny organelle inside muscle cells (and other cells) that produce all this ATP.  CoQ10 works in the citric acid cycle, where carbohydrates and fat are broken down to make ATP. If CoQ10 is depleted, the ATP production drops significantly [5]. So you may ask - if there's no CoQ10 (due to long term statin use) how are my cells making energy? Well the muscle can use alternative fuel sources (fructose) which doesn't rely on CoQ10. Two 2-ATP molecules are made from each fructose; whereas glucose (the coQ10 dependant pathway) makes 36 ATP molecules [5]. So your cells are making 18 times more energy with CoQ10 versus without. So as you can see, the muscles will be forced to use a less efficient fuel source. Think about the heart and skeletal tissues - they're the most metabolically active tissues we have - and they're being forced to use the far inferior fuel source of fructose in times CoQ10 is deficient due to statin use. Human trials have shown patients taking a statin reported less fatigue when taking 120 mg of CoQ10 at the same time versus those on a statin alone [6].

As mentioned above, CoQ10 deficiency is a common occurrence with statin use.  Muscle damage comes about via several mechanisms.

Remember CoQ10 also served as a powerful antioxidant. The myocardium (heart tissue) and skeletal tissues require a constant supply of antioxidants. Why? Well free radicals (which anti-oxidants neutralize), are produced as a result of basic metabolism. The more metabolically active a tissue is the more free radicals are made. The heart is always beating, and always producing free radicals. CoQ10 is most abundant in heart tissue in healthy individuals [1] - indicating its meant to be there. If free radicals aren't neutralized by CoQ10, they damage surrounding tissue. So in times of CoQ10 deficiency, people may experience damage to the muscle of the heart itself.

This leads into the next contributing factor. Remember CoQ10 stabilizes cell membranes. Its helps regulate what comes in and goes out of the cell. Cells are delicate - without things like CoQ10, they will be susceptible to damage. With CoQ10 depletion, harmful things will be able to affect our cells.

A potential link between Statins, CoQ10 depletion and Diabetes

CoQ10 may be especially important for those given a statin and also at risk for diabetes [7] [8]. Researchers are saying there is an association between Statin use and Diabetes risk. Experts are saying it depends on many factors: age, pre-existing diabetic risk, type and potency of statin [7] [8]. This is an association, no causative factor has been proven. However, several mechanisms have been suggested including altered B-cell function (of pancreas) as well as statin-induced decrease in circulating adiponectin and CoQ10 [7] [8].

Red Yeast Rice Extract is a natural supplement used to treat high cholesterol. It's a fermented product of the mold Monascus purpureus [9]. The way by which Red Yeast Rice lowers cholesterol is the same as Statins. In fact, the thing that gives Red Yeast Extract it's cholesterol lowering abilities is called monacolin K (also known as lovastatin). Lovastatin is the chief medicinal compound of Merck's Mevacor (a prescription drug). Red Yeast Rice is effective as an anti-cholesterol drug, anti-hypertensive, hypoglycemic agent, anti-inflammatory, anti-cancer and osteogenic agent. However, CoQ10 is also depleted by Red Yeast Rice extract and must therefore be supplemented as well[9].

Update: As of 2017, I know of one commercial product on the Canadian market of Red Yeast Rice that doesn't have monacolin K, but still possesses the health benefits of Red Yeast Rice; all others require simultaneous CoQ10 supplementation.

If you or someone you know takes a statin, CoQ10 is a supplement I would strongly suggest considering. Book in today to find out if you may be dealing with a phenomenon called Statin Intolerance - where your body is unable to work efficiently with the statin. Signs and symptoms are muscle soreness and muscle damage, fatigue, cognitive changes and well as altered kidney and liver function.

If you need help in choosing the best CoQ10 supplement, click here. Or if you're interested in seeing the other important clinical uses of CoQ10, click here.