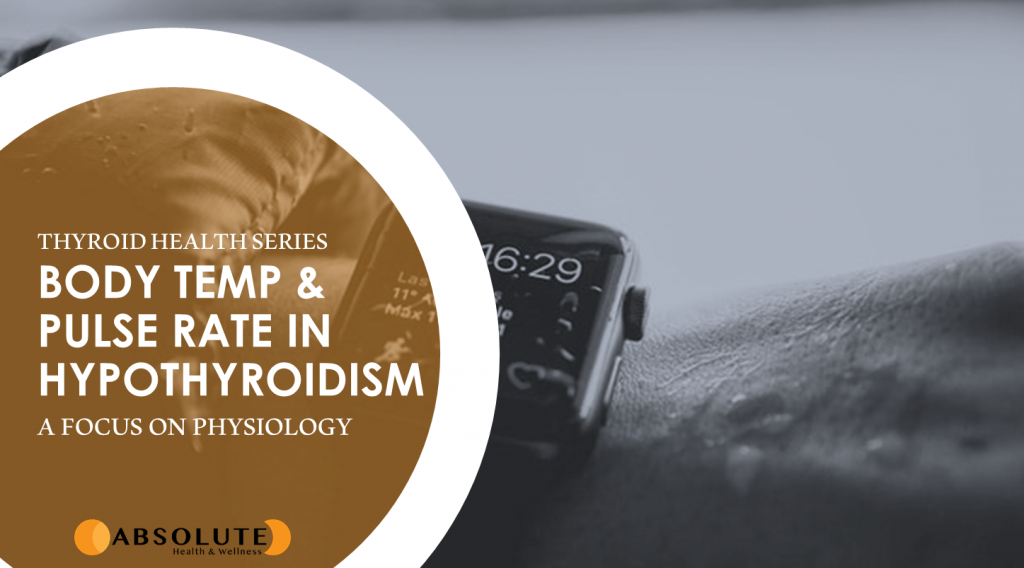 Prior to the current use of TSH (thyroid stimulating hormone) to assess thyroid function, doctors used much simpler, yet highly effective ways to grade thyroid function. Doctors in the 1940's used signs and symptoms to make a working diagnosis and relied on basal metabolic rate to confirm the diagnosis. Basal body temperature, metabolism and heart rate are still currently taught to medical students as being influenced by the thyroid, but ultimately, TSH (a blood marker) is used to make many of the clinical decisions.

Although helpful, and relied upon, sometimes blood tests don't give the whole picture. It can also lead to misdiagnosis.

Prior to the "scientific blood tests" coming out in the 1950's, hypothyroidism was based on temperature, metabolism and heart rate. Back then, it was estimated that about 40% of the population had low functioning thyroid based on these symptoms. The first scientific blood test was actually protein bound iodine (PBI) [1]. When this test came out, it was thought that many of the people who had originally been deemed 'hypothyroid' were in fact euthyroid (normal functioning) [2]. The rate of hypothyroidism dropped to about 5-10% because the tests said so. Sounds good, but in reality, it was actually a mistake. It was later found that PBI was not a very accurate marker of thyroid function [3] [4]. So remember how initially it was thought 40% of the population was hypothyroid? Well people forgot this and still thought far fewer people had dysfunctional thyroid. Next came the first Thyroid Stimulating Hormone (TSH) assay in 1965 [5]. Since much of the population was said to have normal functioning thyroid, when the reference ranges for TSH were made, they were made very wide. The wide reference ranges allowed for many people to fall within the normal limits, even though some may not truly be normal functioning. The reference range of TSH for most labs is about 0.5 to 5.0 mlU/L. In 2003, the National Academy of Clinical Biochemists suggested that 95% of individuals without thyroid disease have TSH below 2.5 mIU/L. This prompted recommendations to lower the upper limit of TSH to about 2.5 mIU/L [6]. As a Naturopath, I look for TSH to be below 2.5 mIU/L.

Remember in the 1930's BMR was used to diagnose thyroid disorders. BMR tells us about the rate of oxygen consumption. The higher your BMR the more oxygen your body uses. When we measure oxygen and carbon dioxide together we can figure out how much energy is coming from fat versus glucose [7]. When we burn glucose, we make more carbon dioxide than when we burn fat. Burning glucose is considered more efficient; we get more energy (ATP) from glucose than we do from fat. When we burn glucose we make carbon dioxide; when we burn fat we don't. So having a higher basal metabolic rate implies we're burning more oxygen; and since its more efficient it may mean we're in a stress free environment [2] [8].

The Link between Thyroid, Reflex and Muscle Contraction/Relaxation

Every medical student and doctor learns to grade motor reflexes when assessing thyroid function. We do this by tapping on a tendon and assessing the reflex. We see a slow reflex in hypothyroidism and an exaggerated reflex in hyperthyroidism. Why do doctors test this and how is thyroid really impacting this reflex?

It is known that thyroid hormone acts on many tissues, including skeletal muscle [9] [10]. The muscles most commonly targeted are those during prolonged effort (slow twitch muscles). Thyroid hormone (specifically T2; which is the de-iodinated form of T4) is known to have effects on calcium, sodium and potassium [10]. Specifically, these three ions must be pumped back and forth across cell membranes for nerves to conduct signals and muscles to contract. If thyroid hormone is lacking, the transport of calcium, potassium and sodium will be sluggish. If these ions are slow to move about, it will take longer for the muscle or nerve to turn on. Another thing we find is that muscles need these ions to then flow in the opposite direct in order for the nerve or muscle to relax. In other words, it takes longer for a muscle to turn on, and then it takes longer for that muscle to turn off. Hence the slow reflex. This also explains why people with hypothyroidism suffer from fatigue - their muscles are working more than they should and that tires them out. With adequate thyroid hormones, the nerves and muscles function properly, so by testing the reflexes, we can assess thyroid function indirectly.

If you understand how reflex testing corresponds to thyroid function; think about extrapolating that to the heart. The heart is a muscle, and it requires the thyroid to allow for contraction and relaxation. The same ions mentioned above (Calcium, potassium and sodium) are integral in optimal functioning of the heart. When the thyroid functions properly, the heart beats at a steady pace, about 60 beats per minute. When the thyroid is low functioning, the pulse will drop low. An exception to this is highly trained athletes who have lower heart rates, but this is due to other adaptive processes. [9]. This explains why we see low heart rate, pulse rate and blood pressure in hypothyroidism and the opposite in hyperthyroidism.

For those with low thyroid function, their pulse may be slow - remember their heart (muscle) is slow to turn on and slow to relax. As we discussed above, hypothyroid patients often have cold hands and feet. This is a consequence of a slower pulse rate and as a consequence diminished blood flow to the extremities. Sometimes people will have a normal pulse because they will have elevated epinephrine to compensate for hypoglycemia; this concept will be discussed later.

Broda Barnes was an American doctor who worked mainly in endocrine dysfunction and focused on hypothyroidism. He argued that body temperature was the best basis of diagnosing thyroid function.

Eating - its effect on temperature

Hypothyroid patient: There is a strong relationship between hypothyroidism and hypoglycemia; many people with hypothyroidism have poor sugar stores and therefore fall hypoglycemic [11]. So if hypothyroid patients have less sugar stores, they essentially have less energy stores. So in between meals, their body has less fuel to burn. Heat production is a consequence of metabolizing sugar, so a hypothyroid person will generate less heat since they have less energy stores. If your body is constantly creating energy from stored sugar, it will be constantly generating small amounts of heat. This is one reason why a hypothyroid patient will present with both low energy and low temperature (or cold intolerance). The reason the extremities will feel cold is because the adrenal system will keep the brain and heart (vital organs) a normal temperature by diverting blood away from the periphery to these vital organs.

Nightly Blood Sugar and its effect on temperature

Normally: Regardless of thyroid status, blood sugar falls at night. Although we're sleeping, our body needs a constant flow of energy. Our bodies will rely of stored sugar to provide energy. Cortisol will usually wake us up as it peaks around 6am as it attempts to raise our blood sugar. See Figure 1, to get a better idea of what is happening physiologically.

In hypothyroidism: many of these patients will have very little stored sugar [11], so epinephrine and cortisol begin to rise. Epinephrine and cortisol rise whenever blood sugar drops as a means to raise blood sugar through a process called glycogenolysis. Our body stores sugar as a molecule called glycogen. When epinephrine and cortisol are around, glycogen will release the stored sugar bit by bit. So at night, if the blood sugar drops too much, epinephrine will raise around 3 am and cortisol will spike around dawn [12]. Some people will wake up during the epinephrine peak with a pounding heart; they may not be able to fall asleep until they eat something; they need to provide some sugar to signal epinephrine to go back to normal levels. The reason the heart races is that epinephrine also has stimulatory effects on the heart (amongst other tissues).  In this condition, the low thyroid function would result in a lower body temperature, but the burning of sugar and rise in cortisol and epinephrine may actually raise the temperature. The net effect can be either an overall drop, a rise or a normal temperature.

Waking up, Stress and their effect on temperature

Remember stress causes rises in epinephrine and cortisol. If night time stress is high, epinephrine will be high in the morning; and that would result in an increased temperature and pulse rate. Once we eat, our blood sugar will be maintained by the food rather than our stress hormones.

Normally: we wake up due to a rise in cortisol (with a rise in blood sugar). Our body temperature should be normal because there wasn't excessively high epinephrine or cortisol (if epinephrine or cortisol are high, we see a raised body temperature). Once we eat breakfast our core temperature will actually rise, and our pulse will speed up. Again, temperature goes up due to our body's metabolism causing heat; and pulse rate increases because when we eat, thyroid hormones go up, which have an effect on pulse rate.

In hypothyroidism: Two conditions may occur. Hypothyroidism may exist with hypoglycemia or without.

Starting with hypothyroidism without hypoglycemia: Say a hypothyroid patient has adequate blood sugar stores. That means overnight, their body will tap into those stores and cortisol and epinephrine won't need to rise. This means our body temperature will be low; in fact it may be too low. Why is it low? Low thyroid leads to sluggish ion (potassium, sodium, calcium) metabolism and causes low pulse rate and blood pressure - which lowers the circulation of warm blood. Also, if you have low thyroid function, you're not as efficient in burning and using energy - so you generate less heat. You wake up with a low temperature. You may not feel cold per se, but your temperature measurement may be below what is ideal.

When to measure Temperature and Pulse Rate

It's should be clear: thyroid hormones play a vital part in temperature generation, pulse rate, metabolism, nerve conduction, plus muscle contractility and relaxation. As doctors, we learn of these associations in assessing thyroid function - It's time we relied on them more in clinical practice.